Which Guy Does She Really Love?

Thought provoking tweet appeared on the timeline the other day: 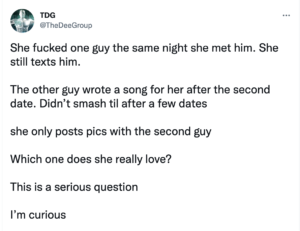 What do I think about it?

Some of you might be able to guess, as I’ve covered stuff like this before. Indeed, I almost decided to simply answer this in a tweet.

But there were a couple of other details this time around that made this worthy of deeper examination.

There is a common trope in the manosphere that the most attractive guy to a woman is the one she sleeps with the fastest. Correspondingly, your level of “alpha” is lower the longer it takes.

But is this really true?

Not necessarily. In fact, I might even say not usually.

Here’s the thing you need to understand about attraction…

There are *two* parts to it: desire and comfort.

Desire is what makes a woman “turned on” by you. And is for obvious reasons what guys fixate on as “alpha.”

(80% of guys who struggle with dating, struggle to create desire)

But comfort — the “beta” speciality — has a very important role as well. And not just tactically to close the deal.

You see… what women want is not simply one of these traits, but BOTH.

When a girl is emotionally disregulated, however, she tends to compartmentalize these needs. In practice, this means she either jumps from “alpha fux” (desire guy) to “beta bux” (comfort guy) in sequence, or has an affair — often (but not always!) cheating on the “beta.”

If a woman has comfort elsewhere in her life (read: relationship with comfort guy), or is not looking for that at the moment — for instance, she’s out at the bar looking to get laid — then she is not going to be looking for anything besides a guy who is fun and turns her on.

The best PUA’s know this, and hone their eye to seek out such girls and play the role she’s looking for. They know while you can get *some* girls in the zone, most won’t be down and there’s nothing you can do. Best to focus your energy on the open targets.

Point of this? You being the “desirable” guy for the evening and getting laid quickly does not mean you have imprinted yourself in the mind of the woman as the man of her dreams.

Indeed, very often the girl sleeps with you fast because that is all she wants from you. Hence why it’s common for girls not to return calls from guys after one night stands, and to not bother going out with guys who they met in a “hook up” context.

A guy who provides desire AND comfort, however, is going to create a very different set of emotions for a girl. And though she might WANT to sleep with him, she restrains herself. Because she knows if she does this too quickly, he’ll stop wanting to see her.

As a man, your ego may not like this restraint. But the reality is you are actually worth much more to her than the guy she banged at the club a few weeks back. And if you approach it correctly, and have some patience, you can end up sleeping with this girl for a much longer amount of time… or decide to make her into a girlfriend.

In these scenarios, as far as I’m concerned the question is not a serious one. The guy who had to wait a few dates but got the girl to sleep with him for months is more “alpha” than the guy who got her the first night but never got a return call. The former has made a much bigger emotional impact on her life than the latter.

In the situation offered above, however, it’s a bit less clear cut.

Because the girl is still messaging the guy she hooked up with.

This reveals that while the guy she posts photos with probably has the advantage — he’s got comfort and some desire; she’s sleeping with him — but his desirability is not as strong as it should be. He is playing more a “comfort” role than a balanced one. So she keeps her hook up in the reserve.

Anyway, just goes to show this stuff is very nuanced.

If you want to understand how women work and how to attract them, while keeping context in mind…

All purchases are deducted from coaching.