The End of the Beginning

Important housekeeping email for you guys today. Because there are a couple of large changes coming here in the next few days and months.

**Skip to the end if you want the big announcement only**

Those who have followed me for a long time, might know that I have been “playing the game on hard.”

I’ve been in business for 7 years now. And yet, I don’t have a sales funnel. Don’t do any marketing, or cold outreach, and pretty much no follow up.

Up until very recently my website has been barely functioning, ugly, and with outdated copy.

(Now it’s beautiful, check it out).

Indeed, my business has pretty much consisted of tweeting, and as of 2017 sending emails on Mailchimp to you fine people.

Now, all of that might have been OK. Ignoring these “hacks” might have forced much slower growth… but by 2019 I still managed to cross that magic threshold of being a multi-six figure business.

And there was no reason it shouldn’t have kept expanding organically. Speaking immodestly, the quality of my material and reputation has carried me through all these headwinds, and the greatest resistance is always at the beginning.

But since the 2020 election — and me taking a “public position” so-to-speak — a more serious problem has occurred.

This has taken a couple of different forms. I’ve received reports that I cannot be found easily, that I don’t show up on their timeline.

But most importantly, my follower count has been locked. 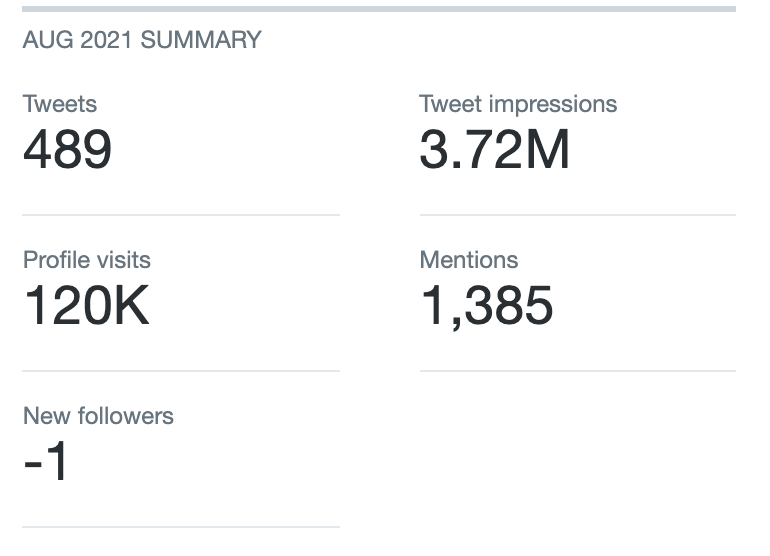 (Some examples. These metrics make no sense, and suffice to say this is not how it is supposed to work on Twitter.)

Moreover, based on some “inside info” (I will not elaborate), I know at least in August 2021 Twitter’s internals indicated I was supposed to have 40k followers. And yet, I have been publicly locked just shy of 30k for the last few months — a number I have essentially been stuck at since November 2020.

Technically, once or twice a year I’m unlocked and “allowed” a small jump of 1-2k (This happened in April/May). But my growth is basically controlled, and it has become impossible for me to expand my business on Twitter.

But do you even care about any of this?

Probably not. It sounds petty to talk about “follower counts.” And yet the reality is this censorship has seriously stymied my outreach, and cost me hundreds of thousands of dollars at this point — a cost that only continues to increase the longer this goes on.

This past year I have been tolerating the situation, as I had other priorities, and was still pulling in sales and clients. Last year more or less matched the year before with revenue. So in a certain sense, I can’t complain: life is good, and I continue to make a good income.

And yet I am tired of fighting uphill.

As you’ve seen, I’ve started building out a YouTube account and just hit 1k (thank you to everyone who has subscribed). I’ll continue doing 1-2 shows every week. This is a big area of expansion for me I will be leaning into.

But Youtube is still “big tech,” and the truth is I can’t trust any of these companies to treat me fairly (including this email provider, which I will also be moving on from in the next few days). So when TruthSocial launches to the public in the next few weeks, I will be putting more and more content there… and likely Gab as well.

Don’t worry. I’m not going to be one of those people who says they’re “leaving Twitter” (everyone who says this is lying anyway). I know the conversations are still happening there, and even if growth is stuck, just shy of 30k followers isn’t something to scoff at.

But will those conversations continue to happen there, if this censorship intensifies?

I know there are concerns about TruthSocial’s technical resilience. Who knows if the company will make it. Who knows if it will be a good place for non-political commentary. But if it does and is, it’ll be good to get in on the ground floor. I will announce when I’ve joined, and hope to see many of you there.

Ok, now for the big announcement and what is probably most germane to you.

In addition to all of these new organic growth strategies, I’m also going to start doing paid lead-gen. And to make sure that is effective, there will finally be a funnel in place…  and that funnel begins with a free pdf of my new, until now unannounced book.

This book is about half new material, half old; synthesized together. It is *not* the “magnum opus” I intend to write in the next year that will “change the game.”

But, it is a necessary foundation for that future piece.

*This* book — The 3 Pilars of Attraction — is a significant amount of material at 20,000 words, and gets progressively denser as it moves to the end. I am very, very proud of it.

Anyway, when this funnel launches *likely* on Tuesday or Wednesday, you will all be added into it. And will receive that pdf (there will be opportunities to buy the book on kindle as well, and probably in print too).

Finally, after the pdf you can expect 30 or so of some of my “best emails” (probably 5 a week over 6 weeks). Those of you who have been around for awhile may recognize them. I hope you don’t mind a revisit. You will get the new ones sent out as well.

Give these new growth strategies and outreach, and this new funnel, it is expected that my business will at least double this year.

Which means working with me is going to be increasingly more expensive and exclusive.

I’m not going to blow smoke up your ass like a lot of coaches and say “space is limited” when it isn’t. I like helping as many guys as possible, and being blunt I like making money. I am not turning down clients, and I want to put off that day as long as possible.

But, the reality is I am already consistently booked nearly 2 weeks in advance on calls. If business doubles, there will necessarily have to be a waitlist… and I will probably have to consider raising prices again to reduce the burden, and prevent burnout.

So, if you were thinking of working with me but wanted to put it off…

I would recommend you don’t.

The link to apply is here: www.patstedman.com/application