A few weeks back an interesting chart crossed the feed on Twitter: 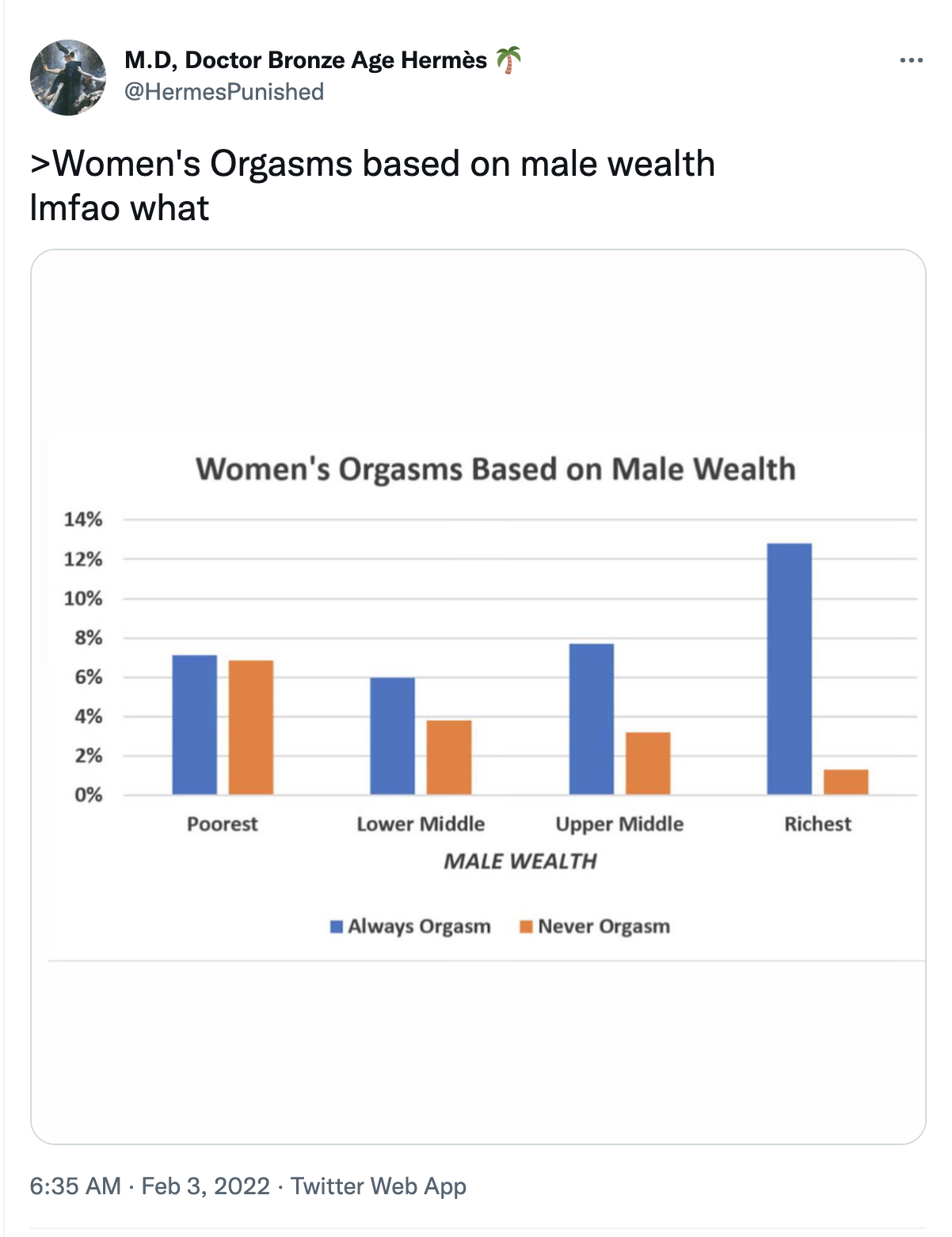 After a second of thinking about it, however, you realize this isn’t really that surprising.

But before I get into that nitty-gritty:

First, I have no idea where this graph came from. Looks frankly by the quality and lack of context like some dude made it up. This is the internet after all — so while we are going to “have fun” with this material, do not take this stuff too seriously.

Second, even assuming this graph is legitimate, please look at the scale. The largest range here is between 7% and 13%. Which means while this is a “doubling” of orgasms — most women still aren’t “always orgasming” much; the impact of your money is minimal in the grand scheme of things.

Anyway, with those disclaimers out of the way…

I have no interest in denigrating a class of people. Indeed, I consider this class the backbone of society, and I have nothing but respect for them.

Nevertheless, “lower middle” / “working class” is in many ways the worst cohort of society to be a part of… especially in this day and age.

You are working long hours, either as a low-level paper pusher or in some sort of manual labor job. You are doing “the right thing” — paying your taxes, trying to support yourself. And yet, how much are you actually making? How comfortable is your life?

It is almost guaranteed in this cohort, your woman is going to be working too. Because she has to. Probably in long hours, without much hope of ever breaking out.

This fatigue alone guarantees she is probably “less turned on.” (Indeed, perhaps this has more to do with why women orgasm with wealthy men than their simple power… they are much better taken care of, and able to relax)

But then she looks at you. And while she may respect you as hard-working, she also sees you clearly as much as a peon in the system. Near the bottom of the hierarchy. Also without much of a chance of breaking out.

You follow the rules, yet you can’t get ahead. It’s a bad combination for sex.

Now look at the poor.

You see the paradox that a higher number of women in this category are always orgasming… with simultaneously the highest number of them never.

But this makes perfect sense, really.

Poor people fall into two categories: those who scrape around to get by, and those who do not care about the system at all and have “opted out of it.” The former type are those in minimum wage / day labor jobs; the latter are druggies and criminals.

And while you may hate to hear it, the latter are probably more sexually attractive to women.

Understand, the last thing you want to be as a man is at the bottom of the totem pole. If you follow the rules, and for the privilege of it you get shit on by the whole of society, you are a little more than a slave from a sexual hierarchy standpoint.

If you decide to just do drugs or get into trouble, however, you’re “rebellious.” Perhaps even dangerous. And you are likely to spend a lot of the time you might have spent working, running some game on the other women in the slums.

This “bad boy” behavior is going to turn women on.

Anyway, if you happen to be a poorer guy, the point here isn’t to make you feel like shit about yourself. And it’s definitely not to encourage you to “give up” and act like a criminal because that’s the only way you’re turn on women.

In fact, the lesson here isn’t even about money.

Look, if you enjoy your job, are well compensated, and are treated with respect please ignore this. You’ve got autonomy to live life how you want, and as a result could probably go solo if you wanted to. The optionality is the point here.

But for the other guys with jobs that sap their soul, underplay them, and treat them as disposable…

I am not the first one to say this…

But you NEED to find an exit plan.

And not just simply because maybe just maybe you’ll be more likely to make a girl orgasm.

Because as a man you lose your edge and personal sense of leadership when you do not have control over your income, and where you are dependent on another man to feed you and your family.

You put yourself in a hierarchy, and you place yourself lower in it. And just as a woman may look to her boss instead of you if she is working, she will also see you as less of a leader when you are not a “boss” at your own work.

These may suck to hear, but they are simply the facts.

Up until the industrial revolution, men in this country used to work for themselves. You may find the initial criteria for voting in the Constitution archaic, but part of the reason you had to be a “land-owning man” was because it was implied these men owned their own farms or stores. They were self-employed. There was a sense from the founders that only these men had the masculine agency to make decisions in the interest of the country.

Anyway, perhaps not what you were expecting from this article.

But yes it all ties together.

Which is why you should know, while I am a dating and relationship coach… and that is indeed my focus…

If you are a businessman with issues in your own company, or if you are looking to jump into that way of life…

I can be very much of service to you, seeing as I have one of the most successful dating and relationship companies in the world.

(And we are just getting started this year… believe me…)

Apply to work with me here: www.patstedman.com/application

PS If you are self-employed, all packages can be tax deducted. Just ask.