How Early Should You Get Married?

An interesting tweet about the differences in marriages came up on the timeline the other day: 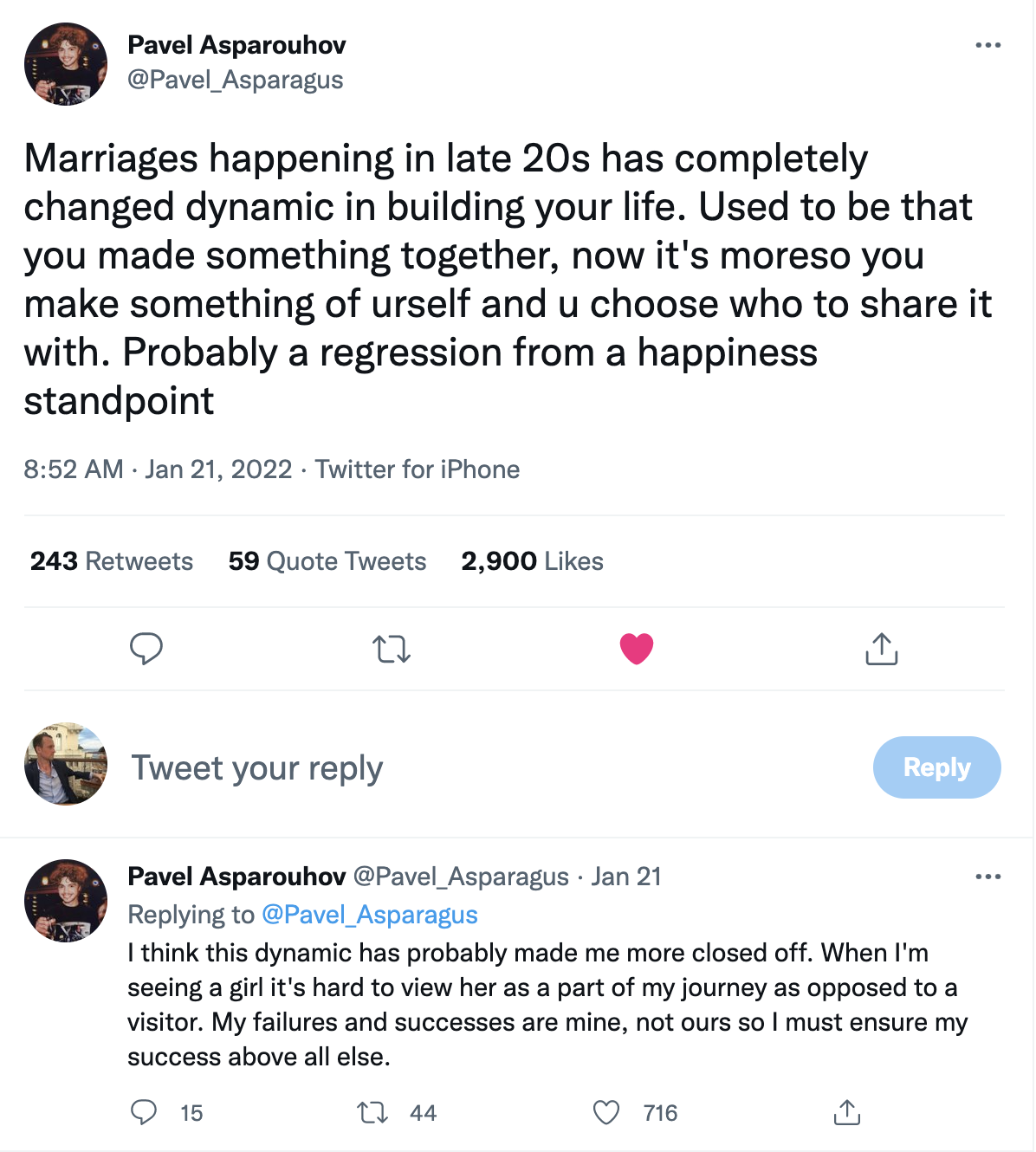 It’s a poignant observation, though it’s unclear exactly how historically accurate it is if you go way far back. In the 1950s sure, there was a lot of marriage taking place between men and women more or less at the same age, straight out of high school or college.

(College for women was female-only — Wellesley, Radcliffe, Bard, Elmira for example— and for the vast majority existed frankly as a means of meeting men at the corresponding Ivy League universities in the vicinity.)

But it was also very common pre-WW1— at least in the upper middle and upper class — for men to marry women only when they were more established themselves. In other words, men would often wait until their mid / late 20s or even beyond to marry; women in contrast would be hitched in their early 20s, sometimes even late teens.

(Yes, men and women both got married beyond these ages. But unsurprisingly, the more attractive women were generally taken off the market early by the more established men. In other words, attractive women did not have to take risks other women did “betting on” their man.)

Why mention these fun facts? Because it turns out the only real consistent theme throughout history is that women did not have to establish themselves before marriage. Sometimes a man and woman got together on the ground floor — this seems often the case in working and lower middle class communities — but in other social contexts the man had to already be on a good trajectory before marriage was an option, or at least, before he would be able to get a match he wanted.

At any rate, the fact remains marriage dynamics are different now than they were then. Whether or not a man and woman were on the journey together from the outset, or the man invited a woman to join his world — what we have today is two unique, autonomous individuals negotiating whether they should indeed have a merger.  There is less magic and more ego added to the marriage equation.

Frankly, I’m not so sure.

This is going to be an “unpopular opinion.” But a lot of what we see today with marriage and relationships either happening late or not happening at all isn’t a problem so much as a response.

The fact of the matter is, the younger you go, the more absolutely fucked up the population is. We can mock boomers all we want — and blame them for sure — but at least they are functioning individuals. Much of Gen Z barely exists in reality; they live online, can’t look at you in the eye, and a significant minority don’t even know what sex they are attracted to.

This is not their fault. They have been poisoned psychologically and physiologically more than any other generation, to the extent they don’t even know what “normal” is. But the point remains that it might be unreasonable to suggest these people get hitched at a young age when the world is so confusing. They have a lot to sort out.

Understand, it’s easy to get married at 20 when you’re planning to stay in the same small town you grew up in and work at the local factory. Your roots are laid so it’s natural for you and your high-school sweetheart to grow together. But this way of life is over today. Now you need to figure out who you are and what you want, and until you do that, bringing someone else into the picture for the long-haul might very well throw you off course. It’s inviting disaster.

Which is why the “merger” approach to marriage today actually makes sense. These are people who have figured out who they are to a substantial degree and are ready and mature enough to build something with someone else. Consequently in the modern context, these relationships have a much greater chance of success.

The question is really how far you need to mature before it makes sense to get hitched. Practically speaking, mid-20s is probably the best balance between psychology and biology — you’ve had some time to figure yourself out, but can start having kids in your late 20s. Of course, men have more leeway to push this back.

But fundamentally it’s a subjective question, and so it’s hard to give a universal answer.

Here’s a good heuristic though:

Don’t get married if you don’t at least understand the basics of how you and your prospective woman are messed up.

Marriage is an alchemical process, which means you are assumed to have issues when you enter into it. It’s not about being perfect.

But what I’ve seen over and over again is that the guys who get married without any real awareness of their issues or how women work end up in terrible marriages, with divorce looming.

Which is why the work I do.

Because if I can help guys move through their bullshit as fast as possible and understand women… then they have the tools they need to build a healthy and happy relationship.

Obviously, the most hands on and accelerated way to do this is to work with me.

However, I get not all guys have the resources or potentially require that hands on attention.

Which is why I made my masterclass.

And it gives you a full spectrum understanding of yourself, female psychology, attraction, dating, and relationships… so you can attract and keep the woman of your dreams.

You can purchase it here: https://masterclass.patstedman.com/sales-page

PS All masterclass purchases are deducted from coaching. So if you’re not sure about going 1-1, it’s the perfect opportunity to dip your toes into the Pat Stedman encyclopedia…