Do Not Expect A Proportional Response

A little digression from our usual dating and relationship talk today, at least on the surface.

Instead wanted to discuss a little drama going on in the manosphere.

As many of you have undoubtably seen, the great Andrew Tate and Coltybrah have had a little bit of a spat.

Coltybrah ran his mouth — as usual — and challenged Andrew (a former professional kickboxer) to a fight.

Which was a big mistake.

Colty has a lot of skeletons in his closet. As I revealed last year during my own altercation with him, Colty has done gay-for-pay. And while it is not my business what a man likes or does in his own time, pretending to be some badass internet alpha when you are in fact a male prostitute is not a good look. 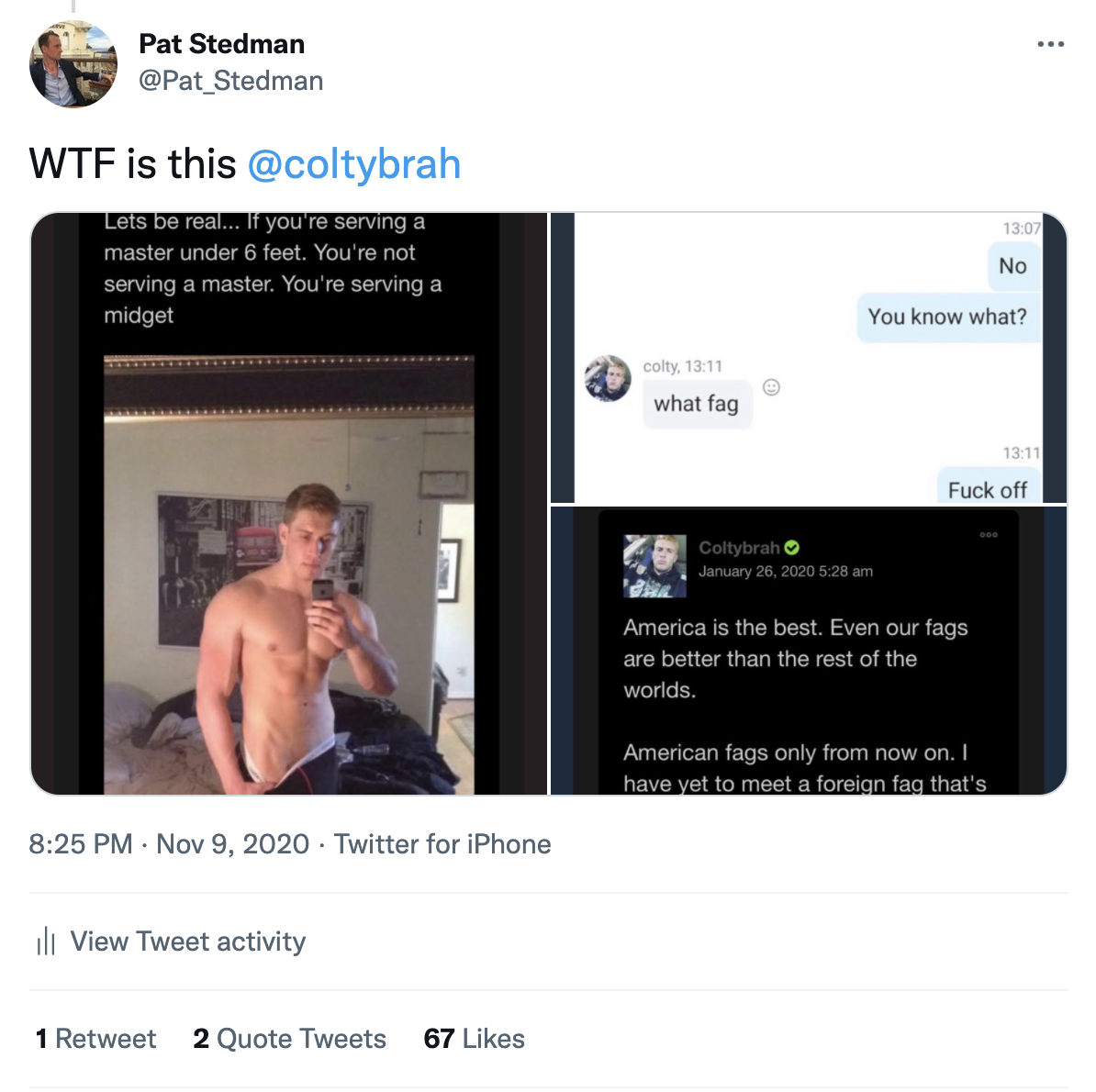 But what is also not known is that while Colty is indeed well-off… he is a trust-fund kid born just a few inches from home base.

This is immaterial on one hand, as there is nothing wrong with starting out with advantages. Yet this also belies a deeper issue with Colty: he has not had to earn anything in life. And so he resents his father who gave this to him, and feels like he does not deserve what he has. He uses cocaine regularly to numb this pain.

Which is why Colty has spent much of his last few years on Twitter bullying people to feel good about himself. Like most bullies, of course, he does not follow through with his taunts when actually challenged. He is a coward at his core — as Shakespeare would say, his boasts are “a tale told by an idiot, full of sound and fury, signifying nothing.”

Yet despite a few bloody noses, he’s managed to maintain enough of a simp fan base to continue running his mouth.

Andrew has now called Colty’s bluff with the only thing rich people understand: lawsuits. Colty’s family has been involved in the matter, and they are learning all sorts of things about their son in the process. Effectively, Colty must fight Andrew now, or his family will be involved in an expensive civil suit for the foreseeable future. And Colty will have even more of his dark life unearthed to the public, as Andrew will spare no expense to have detectives dig into his personal life. 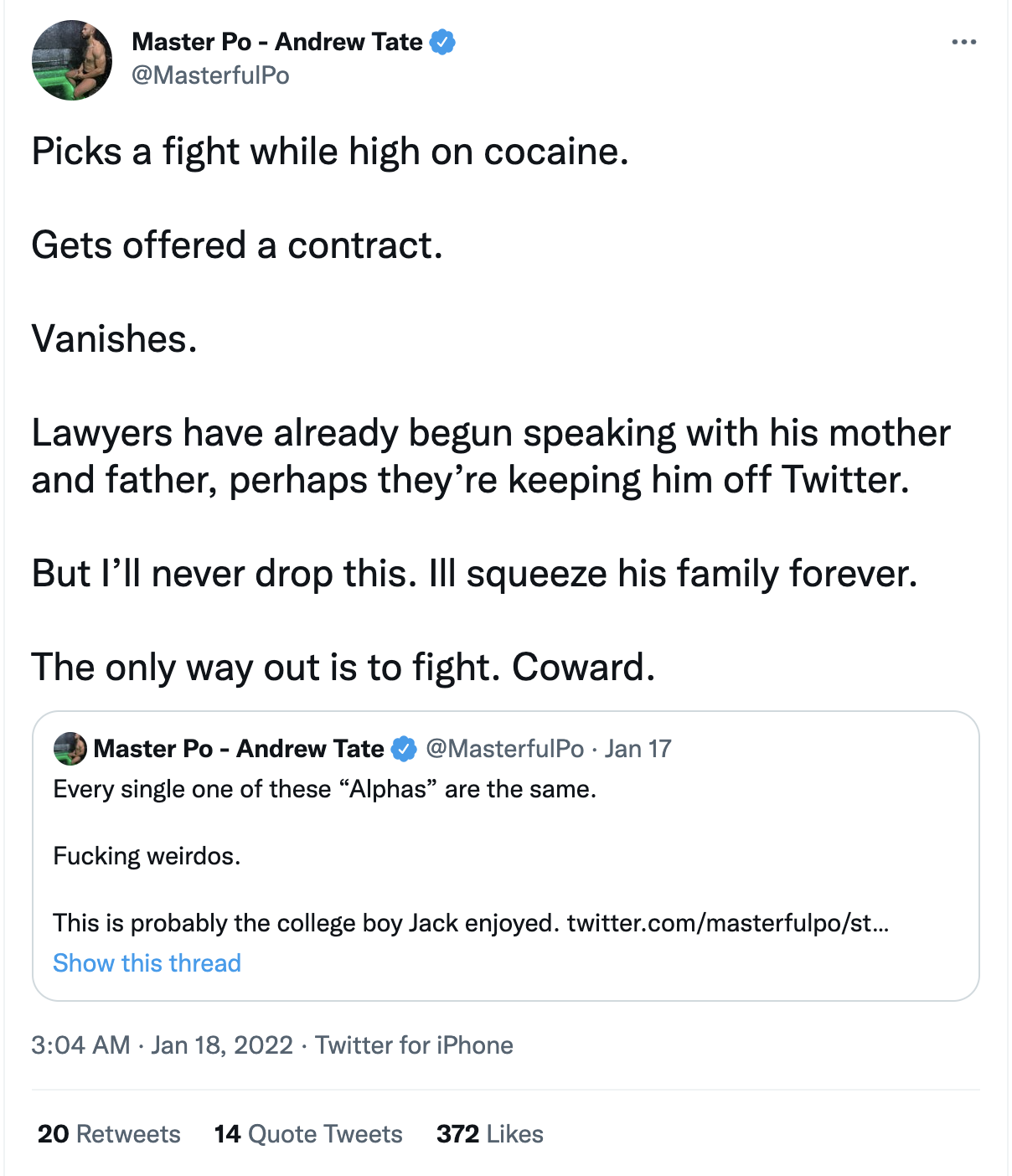 Now, many of you might say this approach by Andrew is excessive. The point has been made, why continue? Why involve his family in a simple Twitter beef?

I understand this argument about proportionality.

I also personally disagree with it in this case.

To say Colty is a piece of shit is putting it lightly, and his absolute destruction sets a good precedent to discourage his kind of arrogant behavior among others in the future — not simply towards Andrew, but towards other men generally. The manosphere is fundamentally a community of support and improvement, and guys like Colty who punish displays of authenticity are a cancer on it.

Moreover, it is good policy to not give your enemies the chance to come back after you. As Law 15 in the 48 Laws of Power states:

“Crush your enemy totally. Don’t go halfway with them or give them any options whatsoever. If you leave even one ember smoldering, it will eventually ignite. You can’t afford to be lenient.”

However, the point here is not really about whether Andrew’s approach is the one you should or shouldn’t take.

The point is simply that men like Andrew exist out there.

And while it should have been apparent from Twitter that Andrew was the type of man who is either your best friend or your worst enemy, you don’t always know this when you’re out and about.

So watch what you say. Or you might get the humbling you’re asking for.

Colty couldn’t do this, because his deep-seated need for acknowledgment makes him impulsively and unconsciously attack others. Making you feel bad makes him feel good — and moreover, gives him the attention he never received as a child. It is the same reason he got into gay-for-pay; it’s validating, at least there someone wants him.

Which is why you need to deal with your emotional baggage. Because otherwise you will fall into all sorts of patterns like this. Unconscious issues cannot be suppressed indefinitely, and when they emerge, they are generally self-destructive.

Had Colty dealt with the fact that his father was indifferent to him and threw money at him to compensate for a lack of love and attention, this would not have happened.

Had he decided to work with someone like me who would listen to him, and help him develop a healthy relationship with his father, he would not have this public humiliation heaped upon him.

But he made his choice.

You must make yours.

If you want help my transcending your trauma and self-sabotage, apply here: www.patstedman.com/application