Why I “Bully Women”

So it seems as if I touched a nerve.

Roobz — a woman who I have been on panels with, and who I have only ever supported — decided to make some comments about my marriage in a public forum.

Apparently she felt it was appropriate to raise her opinion among strangers. So I raised the stakes and called her out even more publicly.

I guess that was very mean right? Because she’s obviously poor and fragile — that’s automatic with her being a woman, isn’t it? What is it with this epidemic of guys who say such things about girls who insult them and their wives? They are such bullies. Aren’t they?

I am going to be very direct with you guys. Because some of you are probably still confused.

I love my wife.

I am open about being in love with my wife.

But perhaps more crucially, I am open about my marriage, and the evolution it has taken to get to where it is. I have never claimed to be perfect. All I have claimed to be is good and getting better, and open about the journey.

So if some woman who pretends to be my ally decides to insult my marriage and demean my wife — I am going to call it out. I will “bully” any woman who does this and I will do it unapologetically.

The question is not why I would do this, but why many of the men on Twitter lose their ball sacks when a guy defends himself against a woman.

The fact of the matter is, this community is mentally weak and is getting weaker by the day as more attractive women find their way into it. I will accept that some guys with bigger profiles who are only interested in hooking up find it “easy pickings” to “defend wamen” when the female ego is stricken. But most of you are not going to get laid from your pathetic behavior. Please stop and reflect and take a birds eye view of the situation.

The only woman in this situation I care about is my wife. When I post a picture of our family, and some girl insults it — my wife is insulted. Maybe you are too weak to understand that this makes Roobz — who has still not apologized — the “bitch” in the situation. But I will underline it further so you grasp the implications of this.

Women when they are being malicious have an inclination towards subversion.

They will pretend to like you to your face, while they undermine your position with other people. You may think I was “too aggressive” in this situation — but I would rather everybody know exactly who Roobz is in character and take the short-term “tension toll” for addressing it rather than act as if everything is OK. Unlike many of the guys on Twitter I have no interest in fucking Roobz, so it is really not difficult for me to call out her behavior. The only woman I want is my wife, and I act accordingly.

Not all women are good people. If you cannot understand this then you are destined to be used and abused by them. They are as bad as men are, and it doesn’t matter how they look. I am not necessarily putting Roobz in this category, as she is young and immature, but there is no progress when there are no consequences. I am happy to be the bad cop who makes this a painful lesson; others can smooth out the edges.

But before I make a pitch about working with me to avoid this simp mindset, something else needs to be said.

The guy who engaged in this behavior with Roobz was a former client. I have been open about this.

I will be more open and note this was not his first offense. Last spring he also made insulting comments about my marriage in public — even as he pretended to be a friend and was participating in my client group. My response was not drama but to take him aside privately and ask him why he would do that, and why it was both hurtful to me and unacceptable given our dynamic.

He apologized profusely and I forgave him. I offered him the chance to use the rest of his calls, and we began working together again in earnest over the summer.

During our renewed coaching substantial progress was being made. He came to NYC and I took him out for dinner and a night on the town. Abruptly, however, he stopped scheduling calls. I have my suspicions of why this happened, but without going into more drama than is necessary I realized the confidentiality of our relationship had been compromised, and so I closed out our coaching. On the surface this ending was amicable, but apparently there was another agenda for him at play.

The point of the above is simply to say that this individual betrayed me and personally slandered me and my wife multiple times for no understandable or justifiable reason. People going their separate ways happens. But this ingratitude and meanness is something I have never had to deal with before in the course of my 7 years and nearly 300 clients of coaching.

So if you are someone who feels like anything I did “went too far” with him or “breached client confidentiality” I want you to know:

Please do not apply to work with me.

I put myself out there for my clients, and I share my personal life with them in hopes of helping them on their journey — because that is part of how I help THEM to change.

Our confidentiality is a two-way street.

At the end of the day I do not give two fucks about your money, what I care about is that I can trust you.

If you think this is simply a transactional dynamic, by all means go find some newly minted coach who will happily sell you an impersonal formula and claim to solve your problems.

Most of my clients become lifelong friends.

If you do not have the capacity for honor in you, please kindly fuck off.

The rest of you can apply here: www.patstedman.com/application

And apply well. In the aftermath of this I screen more carefully.

My relationship with clients these days looks more like this: 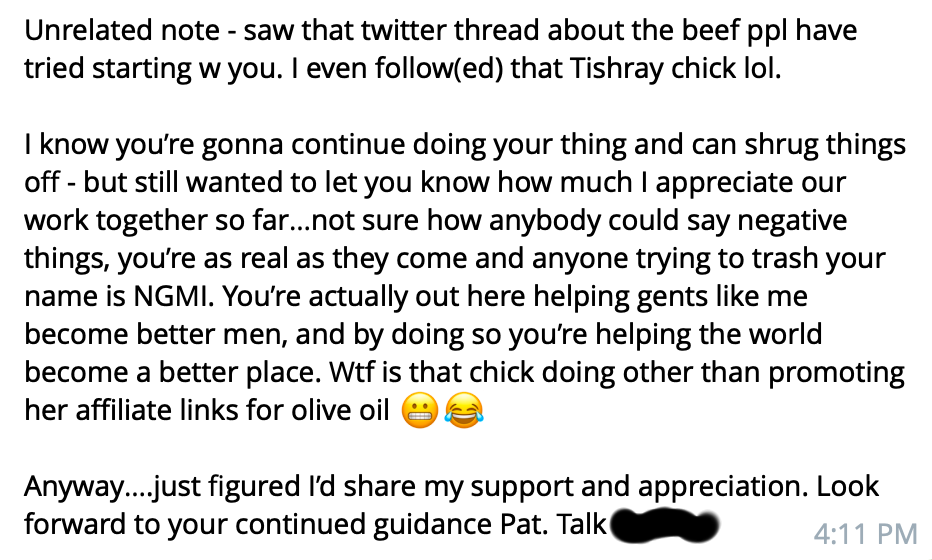