Another good thread from Roobz decided to riff off of: 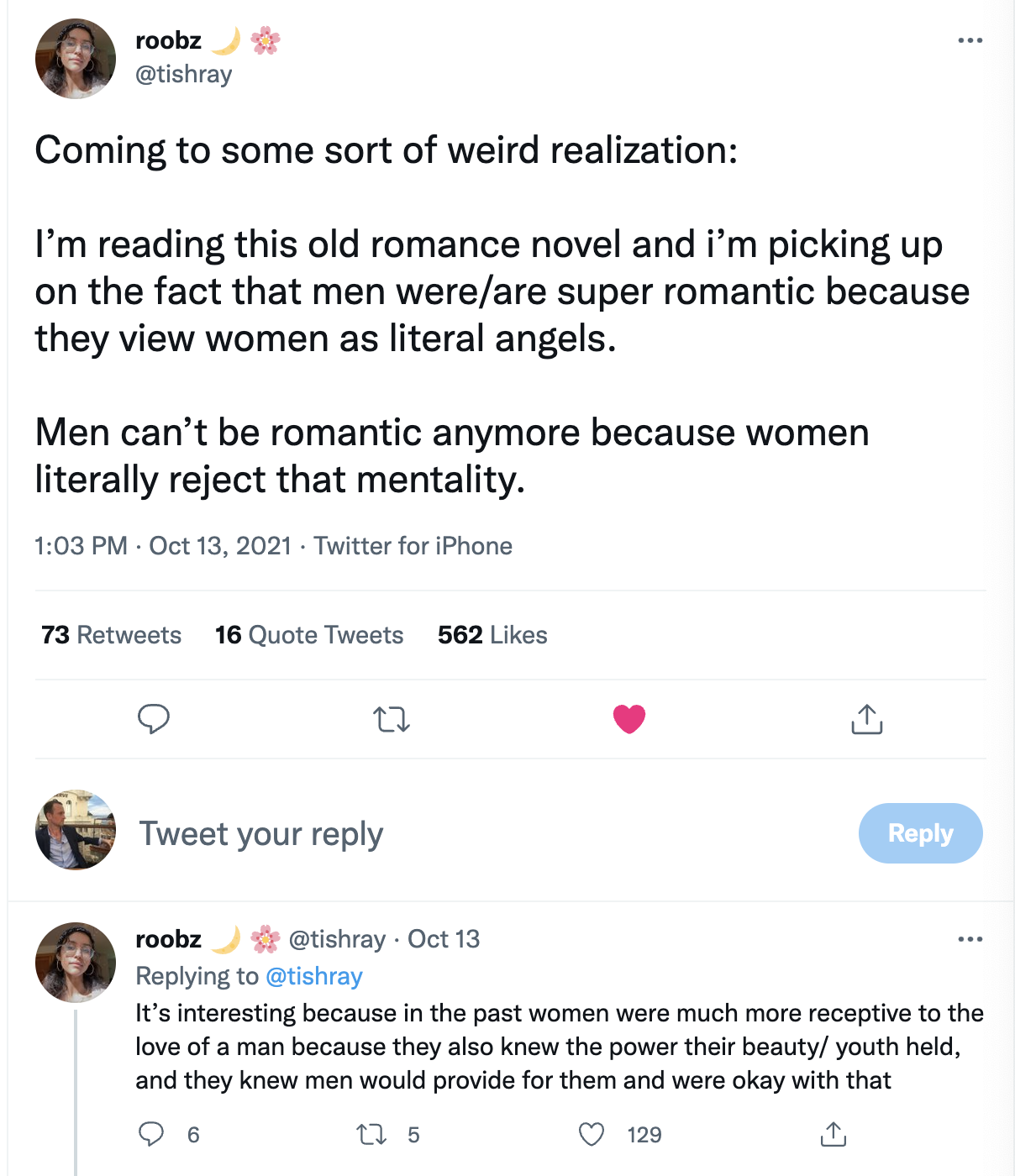 First things first: women DO struggle to receive admiration for their beauty these days.

Social programming has been very successful at traumatizing women and making them consider the “male gaze” oppressive or demeaning. Most of the modern problems in sexual dynamics flow downstream from this.

But I also don’t think we should draw the wrong conclusions about men and women from other periods in history, which had their own artificial cultural mores and milieus. The romantic era may have had its charms, but it was fundamentally a fantasy land.

Women were caged birds who spent their single lives living under the wing of their fathers, and dressed up at dances and hoped to catch the eye of some prince or landed aristocrat — so they could get married and live under his wing instead.

Separation between the sexes, except at these sort of functions, led to tension, and absence amplified the fantasy. Men idealized these pretty women as pure and perfect, and the attractive men were idealized by women as heroic and charming. Men were moved by these fantasies to make romantic gestures, and women were not only socially but emotionally primed to receive them.

Remember: most women in this social class literally sat inside all day with nothing to do but gossip about the glance Prince Andrew gave them at the last ball. So the sexual tension about even the smallest things was high. There was a lot of waiting between meetings, and so a lot of time for men and women to build things up in their mind.

The point is that the romantic scene of this era was frivolous and I don’t think we should be taking too many cues from it. Fantasy is in general the bane of healthy relationships, because it is based on our of emotional projection. Fantasy always fades to reality, and the greater the differential, the more resentment and pain.

Moreover, women aren’t literal angels. To the extent women were relatively prude then, was because there was a massive patriarchal structure that constrained women’s sexual behavior and freedom entirely. This was first established in the home by the father (and mother!!), and enforced by society as whole. Even if a woman wanted to be a slut there was almost no way for it to happen. And if a woman did succumb to her feral instincts, she was basically destroyed socially. No one would see her or associate with her.

So it’s not surprising why men COULD romanticize women. There was a complete suppression of the female shadow.

Contrast this to the modern era and the problem in recreating this environment is apparent. Most fathers don’t police their daughters behavior; many mothers actively encourage them to “enjoy their freedom.”

In other words — the merits of fantasy aside — it’s very hard to find a girl today a man could reasonably romanticize. You know if your current girlfriend went to college the chances of her having a one night stand or sucking a stranger’s dick approaches 100%. The mark of a slut these days is how many times she did it.

I don’t say this to be crass or depressing, simply to make a point that social mores attempting to compartmentalize the male and female psyche are doomed to fail. We need to get past this if we are actually going to build a healthy world. There is little difference in approach between the Victorian Era’s enforced prudence and the Cabal Era’s enforced promiscuity. Both are opposite sides of the pendulum we keep swinging on.

Which is why I reject both. I envision a future with no enforcement — simply individual autonomy and truth. A society that encourages awareness and integration of our dark side, but doesn’t dictate behavior. So a woman can be aware of her feral desires yet channel them in more self-honoring ways.

Because the pedestal inevitably leads to the gutter. The madonna assuredly morphs into the whore.

The decline of women was predestined after keeping those little birds caged for so long.

Work with me if you want to integrate yourselves: www.patstedman.com/application