Why The Chad Dates Down

A reader writes in: 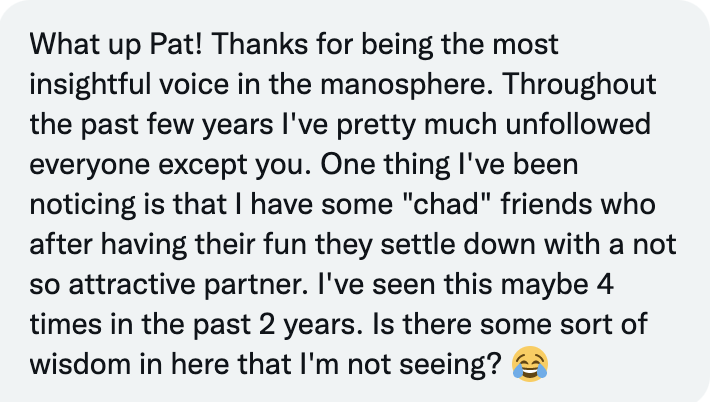 Blushing at that intro! However the question is a very good one.

Why DO “chads” so often end up with unattractive women?

One of the many phenomena “the red pill” would rather ignore than attempt to explain… because it contradicts some of their deeply held beliefs about “alpha males.”

First, many — though of course not all — “chads” may seem confident, but in truth are fairly insecure. For instance, it’s well known in body-building circles that most of the hardcore guys spend so much time in the gym BECAUSE they don’t feel good about themselves.

The manosphere jokes about guys “going to the gym instead of therapy,” but the reality is if you accept that premise (and you should), what follows is that a lot of the guys in the gym are hurting.

(For the idiots out there — no, this isn’t a knock on going to the gym)

So why does this matter?

Because these guys might hook up with attractive women in high school / college etc. where preselection has a particularly high cache, and hot women and handsome men tend to hang out in the same circles. But their results are more a reflection of their status and the desire for women to “use” an attractive guy for a hook up / fling rather than the woman herself liking the guy for who he is.

Read that again because it’s important. These guys are getting girls not necessarily because of who they are, but because they look good and are popular.

What this means is down the line not only will these guys lose many of these hot-girl options as they leave that “easy” tribal environment, but they are not used to women caring about THEM.

And so they are VERY susceptible to women who come into their lives and make them feel “seen.” Especially if their self-esteem is nothing special to begin with.

So this is the main reason the chad “dates down” when it comes time for something serious.

However there is another, more simple explanation that applies to some chads.

These guys have hooked up with so many attractive women, they really just don’t care as much about looks anymore. They don’t have the strong ego investment in getting a “9” or a girl who matches their looks because they’ve “been there done that.” A woman who treats them well, they have fun with, and will be a good mother/wife is enough.

Part of this is “hypergamy arbitrage.” Sure they could get an 8, but how much shit would they have to deal with? A 6 is low-maintenance and is not only guaranteed not to cheat, but to tolerate his own affairs.

Anyway, some explanations to help you understand the complicated and nuanced world of attraction.

And if you want to learn more, and really get a handle on things?

You should probably get my masterclass.

Fun fact: many of the guys who come to work with me are relatively indifferent to the masterclass at first. They want one-on-one time to pick my brain and don’t care about a video course.

(I understand this btw, as I’m much the same — it’s one of the reason it took me so long to make the masterclass)

And yet these guys consistently come to me AMAZED at the material within. From one recent such client:

So yeah, “don’t sleep on it” as the kids say. It’s 18.5 hours of coaching for a fraction of the cost of working with me. And it’s deducted from that if and when you decide to pull the trigger on coaching.