“As You Are” By Nick Sparks – Book Review 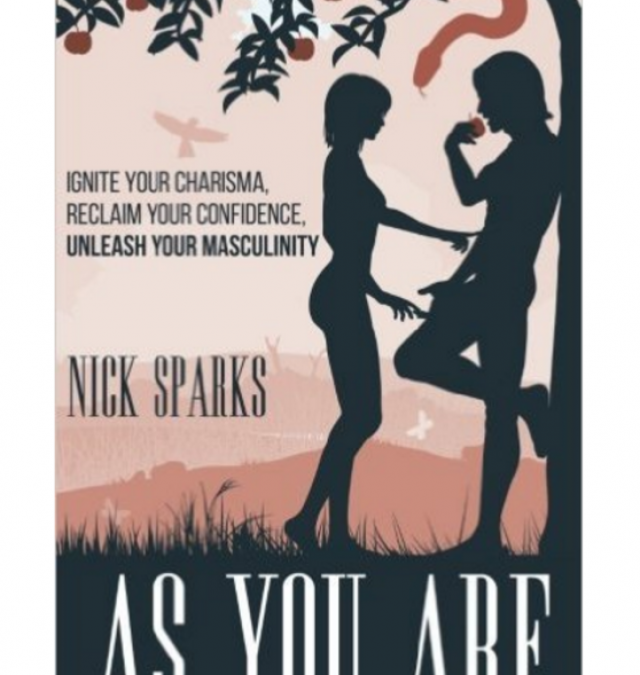 AS YOU ARE: NICK SPARKS BOOK REVIEW

I’ve had a lot of mentors in the dating world. But none changed my life quite so much as Nick Sparks.

I trained under him in person and received perspective from him in an alumni group for years afterwords. Though he is by no means the only source of insight on the world of women I’ve received, he was certainly the most personal and impactful.

He came out with a book, As You Are a year ago. I read it then – but being the fool that I was I didn’t review it (even though it was great).

Well, now that I’ve started running bootcamps, I went back and checked it to see if there was any more wisdom inside we could squeeze out to make the (phenomenal) weekend even better going forward.

Turns out there was.

Why not review the book now? Why not spread the word on some of the goodies within? Nick’s still alive! Better late than never, right?

So I dusted the cobwebs off my laptop (JK, I pretty much live with it every day) and put out this professional assessment of As You Are:

A Caveat: “As You Are” Is About As Far From Pick Up As A “Pick Up” Book Gets

Nick would probably hate for people to call him a Pick Up Artist. But like it or not, he is considered up there with the great “Pick Up Gurus.” Indeed, based on the reviews for his (now defunct) coaching program – he was among the best ones.

Still, I know Nick personally, and his dating approach is as far from the style and philosophy of Pick Up as it gets. When you meet him, you’re slammed by the combination of unshakable masculine confidence, seductive charm, and zen monasticism all rolled into one.

Yet his book does not necessarily come across this way (more on this later).

Instead, it is filled with simple, almost banal principles of how to interact with women; however, grounded not in platitudes but context that makes them killer to the man who adopts them.

I will not reveal all of Nick’s 15 Principles (plus a couple of bonus chapters you get after the purchase on his site). That would be wrong, as the book is worth a read on it’s own.

I will, however, give you a glimpse of some of the big ones, particularly the ones that seem counter-intuitive or atypical to guys grounded heavily in evolution psychology and the seduction world.

Practice “Holding Space” – In It Lies The Keys To The Castle

Unlike many dating coaches, Nick is a natural teacher. Reflecting this, one of his greatest assets – and one which I have taken to heart in my own practice, too – is that a student’s mind should not be bogged down with unnecessary details.

In other words, Nick teaches the 80/20 of romance: only the most simple, basic things you need to do to attract women authentically.

And it doesn’t get any simpler than the crux of his approach, the “one ring to rule them all” in attraction:

Holding Space is straightforward. Here are the key elements of it:

In other words, Holding Space is becoming comfortable with awkwardness. And from there, turning that awkwardness into attraction.

Holding Space is simple, but it is not easy. We have been trained socially to avoid these “moments of truth.” When they come, we all have a tendency to look away.

Fortunately, Nick goes perfectly into why this is and how you can push through them.

Because he knows if you ever want to improve with women, you have to.

Holding Space not only ramps up connection and sexual tension at the same time, it sub-communicates the confidence and composure you need to control the frame.

It is one of the most important concepts in attraction… yet it’s hardly ever discussed.

The nuance behind this concept and how to apply it are worth far more than the pitiful $3.49 cost of the book itself. It transformed my dating life, and turned the moments I used to dread into the ones I looked forward to the most.

But it’s just one small part of the book. Here’s another concept that killed my social anxiety once and for all.

Social Momentum, Or How To Get Into “Flow”

If you’re an introvert, as I am, one of the biggest problems with the whole “dating thing” is that it’s easy to get in your head and self-isolate yourself.

But the truth is, introvert OR extrovert, we’ve all been there.

You go to a bar or party, and you’re with a small group (or by yourself). Pretty girls are hanging all around. Instead of talking to them, however, you start overanalyzing which ones you’re going to go up to and what you’re going to say.

You keep rehearsing the scenario in your head:

How it’s going to go…

What you’re going to do…

And before you know it, the prospect of approaching becomes overwhelming.   So you don’t do it.

Fortunately, Nick talks about how to avoid this in As You Are. The concept is called social momentum:

If I want to socialize with people I don’t already know, I try to get my social momentum rolling as soon as possible. After spending some time enjoying friends’ company, I’ll usually go to the bar (typically where people are most open to socializing with strangers), order a drink, and force myself to say something to whoever is next to me while focusing on holding space. If it’s a party or networking event and there’s no bar then most new conversations still start around the place where refreshments are served. If someone new happens to come around while I’m socializing with friends, that’s even better. Most people want to socialize in those situations but are just as nervous as you are. Someone has to say “hi” first.

Many do not appreciate the power of this paragraph, but in it Nick reveals two things that help make conquering a social setting far easier than it normally would be:

The two things that kill guys in social interactions is getting in their head and looking like a social pariah. Nick’s approach eliminates these issues by having you engage with anyone around you. The more used to talking to people you are, the easier it will be to talk to the girls you really want… and the more “high-status” you’ll appear to be.

Should You Read “As You Are”?

These are but two concepts in As You Are that will revolutionize your interactions with others.

But is the book for you? That depends what you’re looking for.

If you’re in the market for a heavily detailed book with techniques filled with information, As You Are will disappoint.

The mantra for this book is simplicity, not complexity.

If you’re looking for routines or any memorizable lines, you’ll also come out lacking. As You Are keeps human interaction about as basic as it can get.

It doesn’t have any gimmicks. Just the essentials of confident, connected communication our society has lost.

It teaches you everything you really need to attract not only the women you want in your life, but to have powerful conversations with anyone, anywhere.

Without the fluff and filler of most pick up.

Get it here today.

(This article contains affiliate links. If you buy the book, As You Are, I may receive a small commission. This comes at no cost to you. Understand, I only recommend books that I really value and stand behind. The teachings within this book changed my life and have grounded much of my philosophy as a dating coach. Honestly, for $3.49, what are you waiting for? If you care about improving your interactions with women and people in general, this is a no-brainer. I’m not messing around here. Here’s one more link if you missed the other 20.)